My (Unproven) Theory About USA Soccer 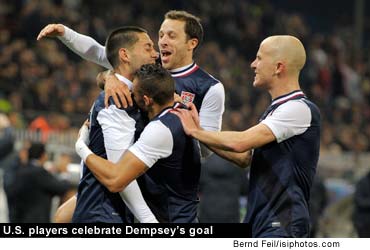 Yesterday's 1-0 victory over Italy has USA soccer fans feeling giddy. Sure it was a friendly and against a less-than full strength Italian side, but breaking a 78 year, 10 game losing streak is worth noting. Especially when it is done on Italian soil. On Twitter Alexi Lalas, former goatee and denim wearing US international, asked what, if anything, is different about US soccer that might account for the victory.

Here is my theory: US soccer players are slowly but surely climbing the ranks of the international game, and not just keepers or individual stars, but a generation of players who give Jurgen Klinsmann a very deep bench. The team as a whole has vastly more experience at a higher level than they did just a few years ago. Consider that yesterday's US scorer Clint Dempsey is not even the same player he was last season.

The last time the US played Italy in Italy was almost exactly 10 years ago, when they lost a tight 1-0 match that featured a 19-year old Landon Donovan who clanked a shot off the post. The difference over those 10 years is a squad with vastly more experience perhaps overall quality -- recognizing that the 2002 squad was extremely strong, reaching the quarterfinals of the World Cup a few months after the loss to Italy. Perhaps most surprising about yesterday's victory in Italy is the fact that few would call it the strongest US line-up.

You can certainly point to the large number of players on that excellent 2002 squad who were playing in Europe, but few were regulars and home clubs included NAC Breda and FC Metz. But it is not enough for US players simply to be based in Europe, where the world's best football is played (in professional leagues, mind you). If the US men's national team is to excel it needs players who excel at the game's top level. Period.

So I have compiled a statistic that I think reflects the new stature of the US squad, and that is the number of goals scored in all competitions by players who are based in European clubs. Thanks to the excellent web site Yanks Abroad, for yesterday's match I come up with a total of 43 goals scored in all competitions (in the current season so far) by the US players who participated (10 starters - I'm not counting MLS-based Breck Shea - plus 4 subs). Yes, I am indeed using this crude offensive statistic as a proxy for experience across the entire game, including defense and keeper as well (no one would argue about Tim Howard's quality, and the keeper position has been a US strength for a long time). However, if there is one area of the game where the US has lacked it is in finishing.

I am hypothesizing that yesterday's squad had the most goals scored in all competitions by European based players than any squad that the US has ever put together. I don't actually know if this is the case (I have emailed the excellent guys at Opta to see what they might be able to tell me, but it is an odd request, and perhaps labor intensive) and I am willing to be corrected -- it is a theory after all.  However, if US soccer has snuck up on anyone, after yesterday's result, the days of sneaking up are probably over.
Posted by Roger Pielke, Jr. at 12:18 PM