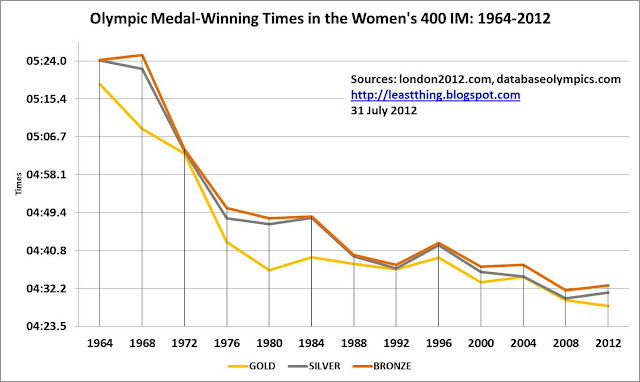 UPDATE: At Science of Sport there is an excellent discussion of the technical aspects of Ye's race and the questions that it raises.

Chinese Olympic swimmer Ye Shiwen has been at the center of controversy since her impressive gold meal-winning effort in the 400 IM on Saturday. Sky News explains:


An international row has erupted over Ye Shiwen, 16, after she took five seconds off her personal best and more than a second off the world record in the 400m individual medley.

She completed her final 50m in 28.93 seconds, putting her 0.17 seconds quicker than American swimming star Ryan Lochte in the men's 400m medley earlier on the same evening.

John Leonard, the US executive director of the World Swimming Coaches Association, described the schoolgirl's performance as suspicious and "disturbing".

In comments that sparked rumours of doping, he branded the lightning-speed swim "unbelievable". Meanwhile, previous world record holder Steph Rice said it was "insanely fast". As China reacted with anger to the suggestion of foul play, Ye denied taking performance-enhancing drugs and said her results come from hard work and training.

Does data from the history of the 400 IM in the Olympics suggest anything odd? Have a look for yourself in the graph at the top of this post which shows medal-winning times in the event since 1964 (data: here 1964-2008, and here for 2012). 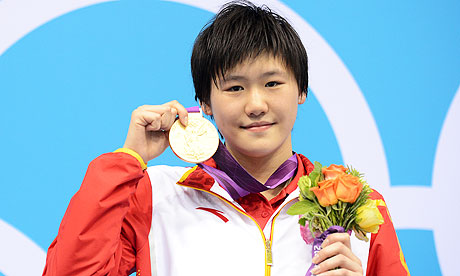 The dataset is nonetheless interesting with a rapid decrease in times from 1964 to 1980, with the massive improvements in speed in 1976 and 1980 coming from East German swimmers, later implicated in a broad pattern of government-sponsored doping. In 1998 the NYT reported:

Since the fall of the Berlin wall, however, documents and court testimony have established the existence of what was long suspected: that East Germany operated a state-sponsored system of providing performance-enhancing drugs to as many as 10,000 athletes from 1968 to 1988. For East Germany, a country of 16 million people, the illicit system gained it scores of Olympic medals, and with those medals considerable stature for an otherwise isolated Communist state.

Then from 1980 to 2000 the winning times did not improve, with the tainted East German record standing until 2000, when 17-year old Ukrainian swimmer Yana Klochkova won the gold medal. Olympic medal-winning times have steadily declined since then.

My reading of the history of times in the 400 IM suggests that there is nothing obviously apparent from the data to suggest anything suspicious about Ye's performance. Obviously something changed sicne 200 to enable improvements after decades of none. Ultimately, such data can only suggest suspicion. The only judgment on doping that matters is that determined by the World Anti-Doping Agency.

As Sky News reports, WADA has found Ye to be clean:


Olympic officials, other swimmers and former athletes have also hit back, insisting that any competitor should be considered innocent until proven guilty. British Olympic Association chairman Lord Moynihan said: "We know how on top of the game Wada (World Anti-Doping Agency) are and Wada have passed her as clean. That's the end of the story.

"And it is regrettable there is so much speculation out there. I don't like it. I think it is wrong. Let us recognise that there is an extraordinary swimmer out there who deserves the recognition of her talent in these Games."

Mark Adams, communications director for the International Olympic Committee (IOC) added: "These are the world's best athletes competing at the very highest level. We have seen all sorts of records broken already all over the place."

He stressed that a "very, very strong drug testing programme" was in place. "We are very confident that if there are cheats we will catch them, as we already have done," he said.

Asked if he was disappointed that talk turns to doping when a world record is smashed, he added: "It is inevitably a sad result of the fact that there are people who dope and who cheat but I equally think it's very sad if we can't applaud a great performance. Let's always give the benefit of the doubt to athletes."

If WADA says she is clean, then that is good enough for me. Congrats to Ye Shiwen -- 2012 IM Olympic Gold Medal Winner!
Posted by Roger Pielke, Jr. at 9:53 AM