Not Just More Fast Sprinters, It is Greater Longevity 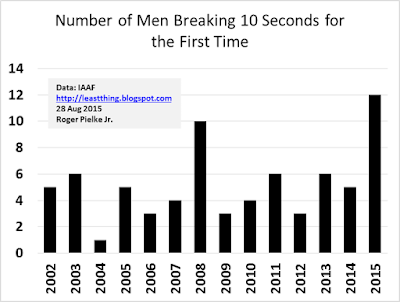 This week I have been exploring a question. Why is it that more men (& women) are running faster times at the elite levels of sprinting? Data can provide some insight to this question, but probably cannot answer it definitively.

So far, I have established that there are more fast sprinters than ever and the age distribution of sprinters has increased dramatically (note: we have processed these data for women also, and will post in due course). There is also a notable break-point in 2007 when it seems clear that something changed in sprinting. But what?

The graph at the top of this post takes this analysis one step further by asking how many men broke 10 seconds in the 100m for the very first time (IAAF data readily available since 2002). For most years the data are fairly constant at 3-6 runners, with the exception of 2004 (1) and 2008 (10) and this year, 2015 (12). There is not a consistent World Championship or Olympic signal.

The other part of this story can be seen in the graphs below. These graphs take this pool of runners sunning sub-10 for the first time, and asks what their average ages are and shows the age distribution. Here is the data since 1999: 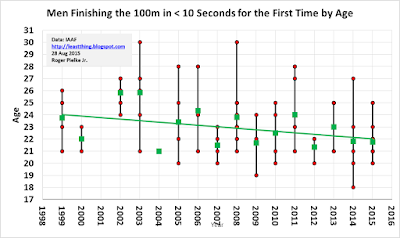 You can see that there is little change in the average, trending a bit younger, and also with the range across first-timers becoming a bit younger. The graph below looks at the period of the rapid increase in fast runners since 2007 and shows little evidence of change. 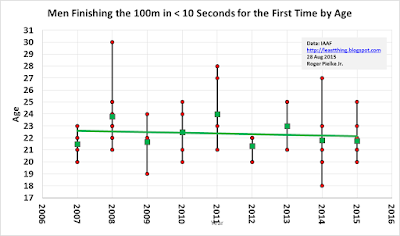 This tells us that another part of the story of more runners running faster than ever is greater longevity of runners. More runners who broke 10 seconds for the first time prior to 2015 are continuing to run at that speed than was the case in the past. So the total number of sub-10 runners accumulates.

So what explains this?

It is likely impossible to tease out the quantitative role of the various contributors to the record number of fast runners, which I'd speculate may each play some role in the observed trend since 2007.

Thanks to David Epstein (@davidepstein) and Ross Tucker (@scienceofsport), who I've learned a great deal from and whose analyses have helped to inspire this series. Thanks also to Torie Duke, student assistant extraordinaire for patiently responding to countless data requests. More analyses to follow. Comments welcomed.
Posted by Roger Pielke, Jr. at 8:31 AM